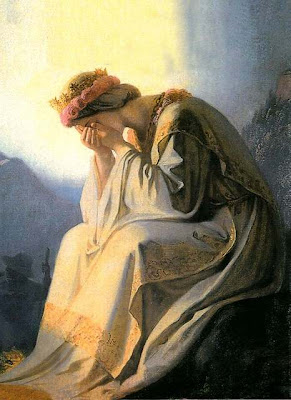 On September 19, 1846, sixteen years after the Blessed Virgin Mary appeared in Rue du Bac, Paris, and twelve years before her appearances in Lourdes, Our Lady appeared to two young shepherds: Mélanie Calvat, aged 14 and Maximin Giraud, aged 11, at La Salette in the French Alps high up on the pasture above La Salette, a village near Corps. Weeping bitterly, Our Lady spoke to them first in French, then in their own dialect, about many things that upset her Son.

Finally, before disappearing, Our Lady confided to each of the children a special secret and asked them to spread her message. Some parts of the secrets are given in a veiled manner, so that one cannot understand without faith nor without some time, effort and thought. These two secrets were sent by the children in 1851 to Pope Pius IX on the advice of Bishop de Bruillard.

Below is the "Written Statement by Maximin Giraud on July 3rd, 1851", quoted as follows:

************
In the reprinted "ne varietur" at Lyon in 1904, which was published a few months before Mélanie's death in December 15, the editor of said reprint, Abbé Combe, adds the following note after this paragraph:
"I have from Melanie that the Church will be eclipsed in this sense, that 1) one will not know which is the true pope; 2) for a time: the holy Sacrifice will cease to be offered in churches, and also in houses: so there will be no more public worship. But she saw that yet the holy Sacrifice would not cease: it would be offered in caves, in tunnels, in barns and in alcoves." in reference to the message of Our Lady:
"The Church will be eclipsed, the world will be in consternation. But behold Enoch and Elie filled with the Spirit of God; they will preach with the strength of God, and men of good will will believe in God, and many souls will be consoled; they will make great progress by the virtue of the Holy Spirit and will condemn the devilish errors of the antichrist."